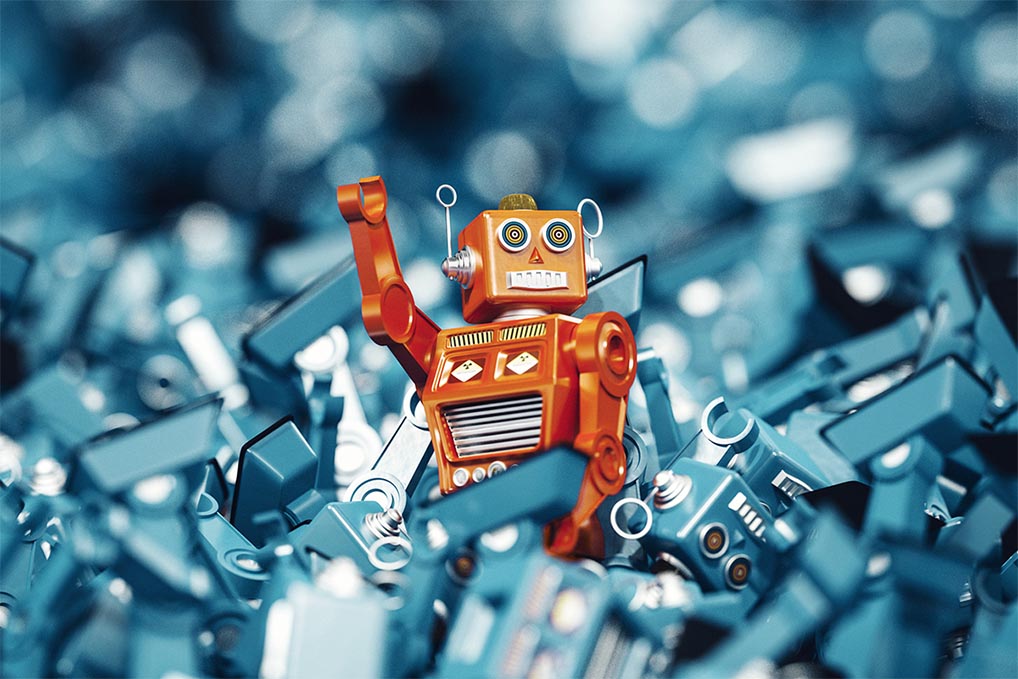 Intelligent machines have conquered the factory floor. Now they’re coming after professional jobs – maybe yours. A summit to be held jointly by Saïd Business School and the Presidents Institute in Copenhagen explains what technological disruption means for organisations – and what skills CEOs need to transition to a successful future.

Could robots replace CEOs? Jack Ma thinks so. Earlier this year, the founder and chairman of the Chinese internet giant Alibaba suggested that the best chief executive 30 years from now is “very likely” to be a robot.

Part prophesy, part provocation, Ma’s comment taps into a deepening sense of disquiet. In a world where disruption is the only constant, nothing – not even leadership – is beyond the reach of automation. What do CEOs need to do to adapt to these challenges? And how can they ensure their organisations are fit for the future?

These are among the questions that will be explored at the Future of Work summit taking place in October in the Danish capital, Copenhagen. Some 2,000 executives from seven countries will gather for the day-long summit, which is being led by Saïd Business School in collaboration with the Presidents Institute, an international organisation set up more than a decade ago to promote leadership best practice. ‘We see the summit as an opportunity to share some of our best thinking and to reach an audience at scale in a region with a history of innovation in business practice and distinctive views on business and society,’ says Alison McQuater, Associate Fellow, Saïd Business School. ‘We also see it as an opportunity to showcase some of our CEO research.’

One of the summit’s key themes is how “future-fit” organisations and their leaders are. ‘We’re going to take audience members on a journey which starts by presenting some broader megatrends that are having an effect on all organisations and that they may recognise already,’ says McQuater.

Technological disruption is one of those megatrends. ‘This used to be something that went on outside the office. Now disruption is moving into the workplace,’ says Christian Engelsen, CEO and founder of the Presidents Institute. ‘Most CEOs recognise that this is already happening in their businesses, which is why people are getting more interested in what their workplace will look like.’

Automation has been chipping away at manual jobs for years. But now it’s professional skills that are in the firing line. ‘There is a very definite trend towards artificial intelligence doing some of the work of paralegals and accountants,’ observes McQuater. ‘These professionals are having to redefine what their roles are. They have to find a way of adding more value for their clients than a machine can.’ Technology is having an impact not only on skills, but also on the way businesses organise themselves. Mobile communications and collaborative platforms, for example, make it possible to build and manage teams anywhere in the world. Remote working helps businesses to become more agile; looser workplace ties are also attractive with staff, whose expectations are increasingly one step ahead of their employers.

‘The nine-to-five sitting-behind-a-desk picture of the workplace is under siege from the new generation. They want to work freelance, they want to be involved, they have a different view of how to be managed and how to manage themselves,’ notes Engelsen. ‘In my generation, it’s been common to have ten or maybe 15 jobs. The next generation will probably have 80 jobs – or maybe never have a job at all and be freelance and project-oriented.’

A sense of purpose

Becoming a future-fit organisation goes beyond simply managing new technology. It demands new ways of thinking. This is exemplified by the emerging concept of shared value – an idea which places social good on a par with profit. ‘Our work with organisations shows that there are deep questions that need to be addressed,’ says McQuater. ‘What purpose are you serving as an organisation? What purpose are you serving as a leader? It’s more than just making money for your shareholders. In future, organisations will have to have a much more compelling purpose if they are to attract great people and balance different stakeholder needs.’

Employees want an identity and a mission they can embark on. So, if we’re making electric mobility chairs – who is buying them?

The ability to define and communicate the purpose of an organisation to multiple stakeholders is becoming a key skill for CEOs, believes Engelsen. ‘Employees want an identity and a mission they can embark on. So, if we’re making electric mobility chairs – who’s buying them? Are they helping disabled people to live a more comfortable life? That’s the story you need to tell them. The workforce has an increasing appetite for serving a good purpose.’ For many CEOs, this sort of storytelling comes naturally. What they might not find so easy is straddling the transition between current and future modes of working. ‘Leaders and organisations need to be ambidextrous – they must be able to maximise the value and the benefit from their current way of doing things,’ says McQuater. ‘At the same time, they need to be exploring and experimenting with new business models. They are trying to futureproof their business, so if the bottom drops out of the current market, then they are already part of the way towards moving to the next thing.’

As well as exploring the need for purposeful leaders and organisations, the summit will consider what kind of size and shape organisations should be looking to adopt, as well as delving into the inner resources CEOs need to succeed.

‘We’re going to be talking about the need for leaders to operate on a broader bandwidth than they may currently have been doing,’ says McQuater. ‘That gets into the territory of tapping into all the mental, emotional and physical resources, so we’re going to be doing some work around mindfulness, presence and being grounded.’

The summit is designed to inspire and engage with a full programme of speakers, workshops and Q&A sessions, as well as interactive elements. Above all, it aims to offer participants a view beyond the horizon.

‘More or less all business leaders are trained in management and finance,’ notes Engelsen. ‘But disruptive technology was simply non-existent when we went to business school. That’s what we want to help people with.’

To find out more about the summit and to book your ticket, please visit: www.summit.presidents.eu/summit

Harnessing the power of doubt

Leaders need to be decisive, but transformational leadership requires individuals to question their own certainties – particularly as the workplace around them evolves and traditional notions about the role of the CEO are challenged.

For most people, the word “doubt” conjures up ideas of weakness, vacillation and indecision – characteristics that leaders instinctively shy away from. But what if doubt could be harnessed to help make better decisions? That’s the thinking behind the “power of doubt” – the idea that insights can flow when doubt is harnessed constructively.

What is the right thing to do here? Who are the right people to involve? Am I on the right track? Effective CEOs do not view that sort of questioning as a problem

The current business landscape presents leaders with particular challenges. Rapid technological change is turning old certainties upside down. At the same time, organisations are facing up to the need to cater to an ever-growing number of stakeholders – all with pressing but often conflicting expectations and needs. Chasing certainty can be futile in this environment.

In a world where binary “right” or “wrong” answers are increasingly thin on the ground, the key is developing the capability to reach decisions that lie in the grey area between knowing and not knowing, and between anxiety and fearlessness. In other words, decisionmakers need to get comfortable with discomfort.

Understanding discomfort hinges on the recognition that doubt has both intellectual and emotional dimensions – each of which is equally important. ‘Interestingly, doubt is not just about how much you know about something, it’s also about how you feel,’ says Professor Tim Morris, Saïd Business School, who has conducted extensive research into the question of doubt with CEOs from around the world.

People who don’t doubt themselves become fearless and overconfident, especially if they don’t know something. And then they’re borderline dangerous

He warns that leaders who lack self-awareness and the capacity for doubt are a potential threat to their organisations: ‘People who don’t doubt themselves become fearless and overconfident, especially if they don’t know something. And then they’re borderline dangerous.’

Successful leaders create frameworks for handling doubt. ‘The answer we get from our chief executives is that you have to have somebody there, a committee or a process, which is really going to challenge you,’ says Morris. ‘It’s difficult, it makes for tough decision-making, but it’s very valuable.’

Harnessing doubt means being prepared to spread the net widely. Outsourcing doubt not only makes it possible to reach better decisions – and reduces the burden on the CEO – but also helps to forge stronger bonds within and between organisations.

‘It can be an enhancer of relationships,’ says McQuater. ‘The way a CEO would engage with a trusted person or a trusted organisation will potentially uncover solutions that hadn’t previously been considered by the CEO alone. The benefit is getting a better range of choices out of which a better answer could come.’